Latest Image Of The Retreat Released.

The Retreat is The Brewery’s exclusive members club that will be open for the period of the Olympic Games. Here is the latest exciting image to be released showing our historic cobbled courtyard transformed into a relaxing park environment.

Mo*Vida Sets Up For Olympics In The City.

Mo*Vida, London’s popular VIP club, set in the heart of Soho, has teamed up with The Brewery, the premier event and dining company, in East London, to host an array of private events over the course of the London Summer Olympics 2012. The two giants in London’s nightlife and hospitality industries have come up with a ‘pop-up’ concept, to run over the course of two weeks, to be called The Retreat.

With a number of big name acts expected to play accompanied by Mo*Vida’s high profile guestlist The Retreat will be the venue to be and be seen. They will combine Mo*Vida’s knowledge and expertise of the clubbing and VIP experience and The Brewery’s knowledge of events and hospitality. The Retreat will be open from 27th July – 12th August 2012 making it the perfect entertainment venue for the London Summer Olympics 2012.

The venue will be split into 6 distinctly different areas each celebrating the best in British. Mo*Vida will occupy The Club where some of the best DJ’s will be playing well into the early hours offering party goers the VIP experience you would expect from the Soho based club.

We’re super thrilled about the fact that we have just been announced as the hosts of the Music Week Awards. It seems that The Brewery, with the Kerrang and Mojo Awards amongst others, is the go to venue for high profile music events.

This Christmas Miami’s most celebrated nightclub will be recreated at The Brewery for a limited run throughout December. We are now taking bookings for 30 – 1500 person parties with many key dates selling out already. To find out more information go to www.electric-flamingo.com

Summer Parties At The Brewery.

It’s cold outside this we know, but what we also know is that summer is just round the corner and we have it on good authority it is going to be a scorcher.

So what better way to get through the cold winter nights than to host a summer party for you and your colleagues.

From June through August our courtyard will be transformed into a fantastic secret garden and we are taking bookings now. 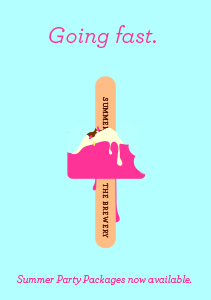 Sustainability at The Brewery: how we do it

What to serve at a daytime wedding reception

The Knowledge Guild – How To Prepare For Unprecedented Change